On Saturday, 20th of January 2013 my wife, my daughter in law and I visited the HAPPY Old Folks Home to give a luncheon to the senior citizens. The Old Folks Home is located at N0. 9, Jalan Labrooy, 30100 Ipoh, Perak. It is a bungalow unit which is rented for RM2,000.00  a month.

The Home is a private home is managed by,  Mrs Chew Bee Teen (SRN/SCM) who is the Nursing Director and her husband Mr Inderjeet Singh. Mrs Chew is a trained staff nurse as well as a mid-wife. Mr Inderjeet was a radiographer before started managing this home full time with his wife, since last year.

Previously this home was managed by another person for about 8 years. Mrs Chew and her husband later took over and now managing it for three years. They also have another home at Kg Simee, Ipoh.

The home is mainly meant for those elderly citizens who are not able to  be taken care by their children or their loved ones,  due to their own commitment. In some cases the children themselves are in the 60s

Those who send these senior citizens to this home have to pay a sum of RM650.00 a month. The family members are requested to provide five sets of clothing. Currently there are 34 of the senior citizens staying in.

The maximum they can house is 36.  The oldest person is about 90 years old and the youngest among them is 58 years old. There are five foreign maids to take care of these elderly citizens. They stay in with the senior citizens.

Just last month one senior citizen passed on to the other realm, at the age of 101. Mrs Chew said that they take care of the senior citizens until the last day of their earthly life.  We believe Mrs Chew being a trained staff nurse should be able to attend to the needs of the elderly citizens. Mrs Chew even showed us the routine blood pressure record. All medical attention is given where necessary. 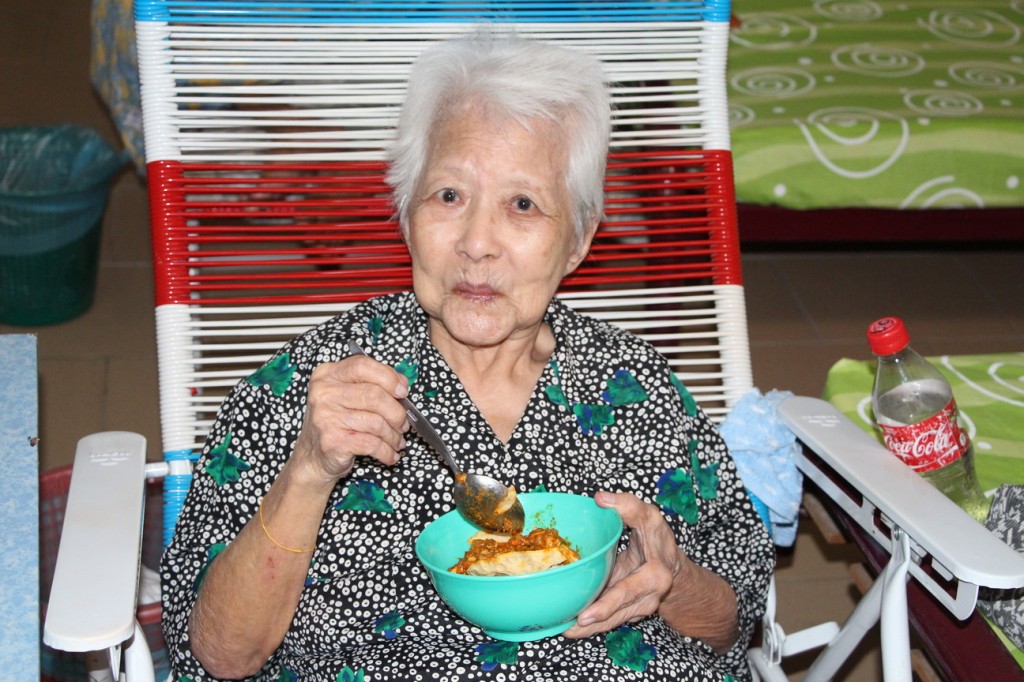 Food menu is arranged by Mrs Chew herself and that she has trained the maids in cooking the various dishes. The dishes are mainly of the Chinese menu as the majority of them are Chinese. Nevertheless the luncheon we provided was of the Indian menu which Mrs Chew specifically requested, as for a change in the routine menu. Anyway from our observation and feedback, the senior citizens generally liked the food.

Breakfast is served from  7.00am to 7.30am with   oats, noodles or bread.  Lunch is served at 12.00 noon with  rice with vegetables and meat,  noodle soup or porridge etc. Dinner is served at 6.00pm and that the senior citizens normally retire to bed early. If they  are awake  later than 8.00pm some drinks also served  before they retire to bed.

Normally the maids are a  little free only after 8.00pm  when the senior citizens retire to bed. They then attend to their needs before going to bed.

According Mr Inderjeet, the cost of managing the home is increasing with the new minimum wage being in force now. Formerly the maids were paid RM700.00 and now it has to be increased to RM900.00. Anyway, the maids are deserved to be paid this sum taking into consideration the care they need to extend to this senior citizens. The maids start work at 9.00am as they have to take the senior citizens to have them washed up in the morning. Some of these senior citizens are in wheel chairs and some need to be carried to the washroom. Thus not only those who have patience but also who care for the needs will be able to take up this job.

Visitors are allowed from 9.00am to 8.00pm. Normally the family members visit them. More visits are common on weekends and holidays. Sometimes some of the senior citizens are taken back home for  a day in some cases maybe a few days. There are two senior citizens whose children are working in Singapore. Thus their visits are generally not too often than those staying nearby.

The premises were kept clean. Mr Inderjeet told me that the maids are to mop the floor four times daily.

During our visit I met a senior citizen above 70 years old, who came to visit his mother who is in the 90s. He told me that his two children are away working outstation. Only he and his wife are in Ipoh. As they themselves are getting older they have no choice but to put his mother in this home. But then he visits her daily and brings her some food for lunch.  Initially he put her in another home but according to him he moved her to this home as the previous place was not kept clean. I talked to his mother who was having some hearing   problem. But the radiance in her face overwhelmed me. I sat beside her and talked to her a few words. She held my hand and I was really touched by her gesture. In spite of her own pain living in this home,  I realised that she puts up a brave cheerful face. Each time I recall it, I feel something different in me.  I wonder whether she was a soul I have met earlier. 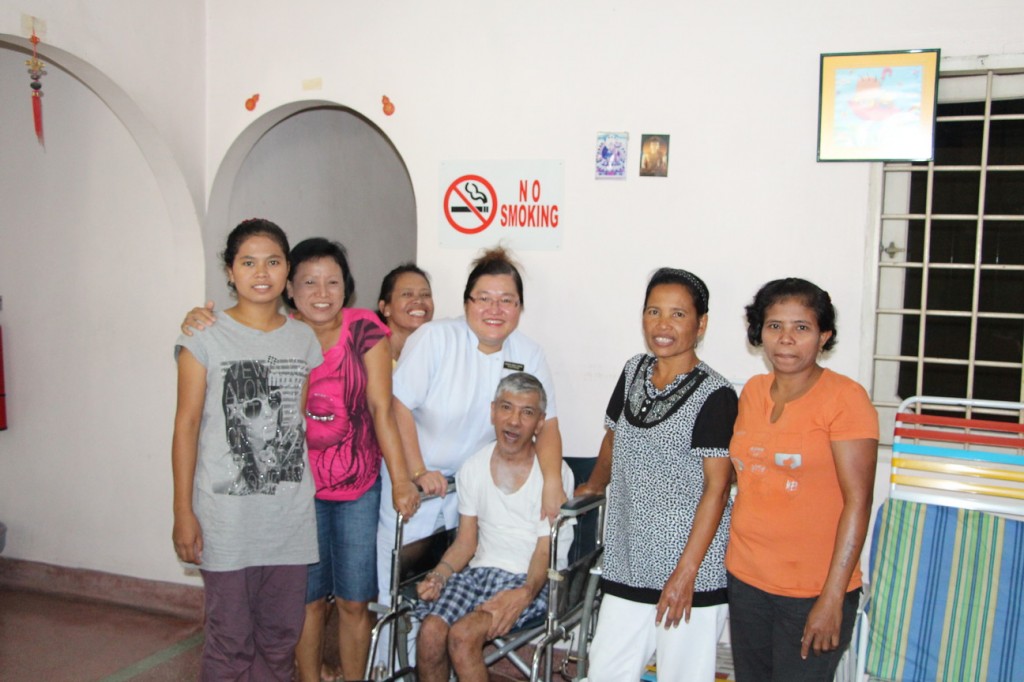 We met all the maids and they pose cheerfully when we request a photo to be taken. I asked Mr Inderjeet whether the maids are happy doing this kind of service. He told me that they are and moreover they are happy because they are together, unlike living as a single maid in an  individual home. I believed what Mr Inderjeet said, by seeing  the happiness in their faces.  Anyway, during our visit, we felt that the senior citizens are well taken care under the management of Mrs Chew and her husband Mr Inderjeet. We based this by seeing the happiness in some of them, the cheerful looking maids as well as Mrs Chew herself who is energetic, bubbly  and the sincerity we saw in her, to help others.

Sometimes I feel we owe the foreign maids a lot since some of us or may be many of us will not be able to take care of our own parents. Looking at it, more such services will be needed  in future as we are expecting the life expectancy to be ‘improving’  although we might not be able to manage things on our own. In some cases many children are going further away from their parents and some residing in overseas and you can see parents talking proudly about it. However, as we age we will have to seek  for new help desperately and sometimes we might be seeking from those whom we have not even met before and that is the foreign maids. However, one question arises, will there be enough maids in the future?

I asked Mr Inderjeet whether he will be able to manage without foreign maids. His answered “NO” without any pause. He said our local maids cannot wake up as early as 5.00am leave alone  getting local maids in the first place.  Of course I believe in what he says. We  will be handicapped, if there are no maids. This will not only affect our country but other countries too.  It is already a concern even in a country like Japan. You can come out with robots but we still need assistance from fellow human beings.  Only after visiting this kind of home we may realise how weak we can be one day, especially if we cannot manage ourselves attending to daily routine needs. Probably a day might come that even with money you might not be able to hire a maid. Extended life expectancy could also be a real problem for every one of us.

The visit to this home is another memorable day seeing the life of senior citizens in such homes. We will continue to visit such welfare homes from time to time in the memory of our beloved, treasured  Prashanth who has been guiding us from the other side, to visit such homes.

How do you say good bye to the person who you loved most, and to the same person who makes your little world complete? – This is a question people silently ask to themselves, and some has asked me too.

I choose not to say Good Bye to the person whom I loved most and to the same person who makes my little world feels complete and colossal. I choose to say and have chosen to say “I will see you again when it’s my turn to step into the kingdom”
Some asked me, what did I tell Prashanth when he left me to his eternal world – was it Good bye or was it “Why must you go now?”
Well, I didn’t tell him any of that. I remember telling him when I was alone with him in the hospital on that early Sunday morning– “Do what you think is right Prashanth. As always, I’ll support you. I would be lost without you but you do what is right for you. I will be here loving you always. I will just continue loving you more and more each day.
Prashanth is the wise one in our relationship. I am the clumsy one. I rarely make decisions without asking his point of view. And every time he decides something, I will always support his decision – ALWAYS. That is how things have been for us. I have his back always and so does he. We support each other until today! He is in his eternal home, and yet I still support him.
So, coming back to what did I tell him when he left me? I only said these few things personally to him :-

1. I love you so much. And I want you to know I love you so much.(I kept on repeating
these words to him)
2. I will see you again Prashanth when it’s my turn to join you. I didn’t say Good bye
because I was brought up by my father to believe, that we will all go to the Kingdom of
Heaven when we leave this world, and when that day comes for me – I will meet
Prashanth and my father again.

The only thing here is, when am I going to leave? When is it my time to go?
I asked my father that before he passed away. Father just told me that he will never know when it is time for me to go, but he told me while waiting for that time to come – live my life. Live my life without regrets, live it with grace and happiness, fill it with the same laughter Prashanth fell for and when the time finally comes, I will go to them with a huge smile on my face with my laughter as an echo.

I am a mere human being. Sometimes in a short moment of my days, I miss both of them especially Prashanth very much. We were sidekicks in everything that we do. Imagine you have a sidekick for 7 years and suddenly, you are left alone! Being human, some days I miss him so much that it cuts my heart. And when that happens I ask the same question again “When is it my turn?” – and every time I asked that question, my father’s words come in to answer it. I wipe my tears, smile ahead, laugh a little at my silliness and move on stronger knowing – I will see my Prashanth again. It’s a promise to both of us.