Prashanth was born on the 27th of May 1983 and it turned out to be Wesak day. He was delivered by caesarean section. He was named by mother. In fact I was looking out for a short name which is not common. My mother proposed the name through my wife thinking that I might reject but without giving a second thought, I told my wife I like it. During that time I had not heard of this name.

Just lately my wife surf the internet and explained to me that the name Prashanth comes from the Sanskrit word meaning “Eternal Peace“. As far back in February 2012, when I proposed this website to be named “Prashanth’s Eternal Home‘, my wife was receptive to the proposal. I named it ‘Eternal’ mainly because it is said that we live on, life after life and that the spiritual home is our original home. Now everything seems to fall in place with this name of the website.

This is Prashanth’s favourite photo, with his mother. He always have it displayed prominently on his table, everytime – wherever he goes. 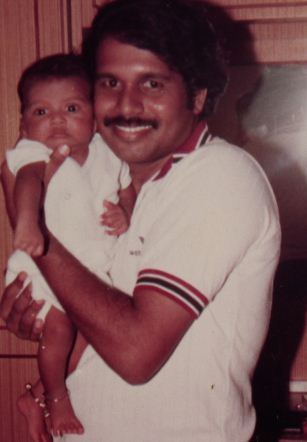 This picture was taken the very next day after delivery. I love this photo very much as I was facing the camera, he seems to be ‘looking’ at me, although I am aware new born babies can only detect light and motion.

He also displayed this photograph on his table even at his last posting.

The first two pictures along with the photos of Tasha together with Prashanth are now displayed on his writing table, at our home.

As Prashanth was growing up we had a wonderful time and then in the year 1988 Vinod joined him as a baby. Prashanth was very excited to have a brother. During that time he was close with Dharshini my niece who is two years younger to Prashanth and who is still a daughter-like to me and my wife. Of course when Tasha came into our family later we claim we have two daughters.

Prashanth and Vinod were two wonderful boys who grew up without quarrelling. A unique cordial relationship existed between right from the beginning. I cannot remember a day any kind of quarrel for us as parents to intervene. As they were growing up and started working the relationship became closer with Tasha being an elder sister for Vinod.